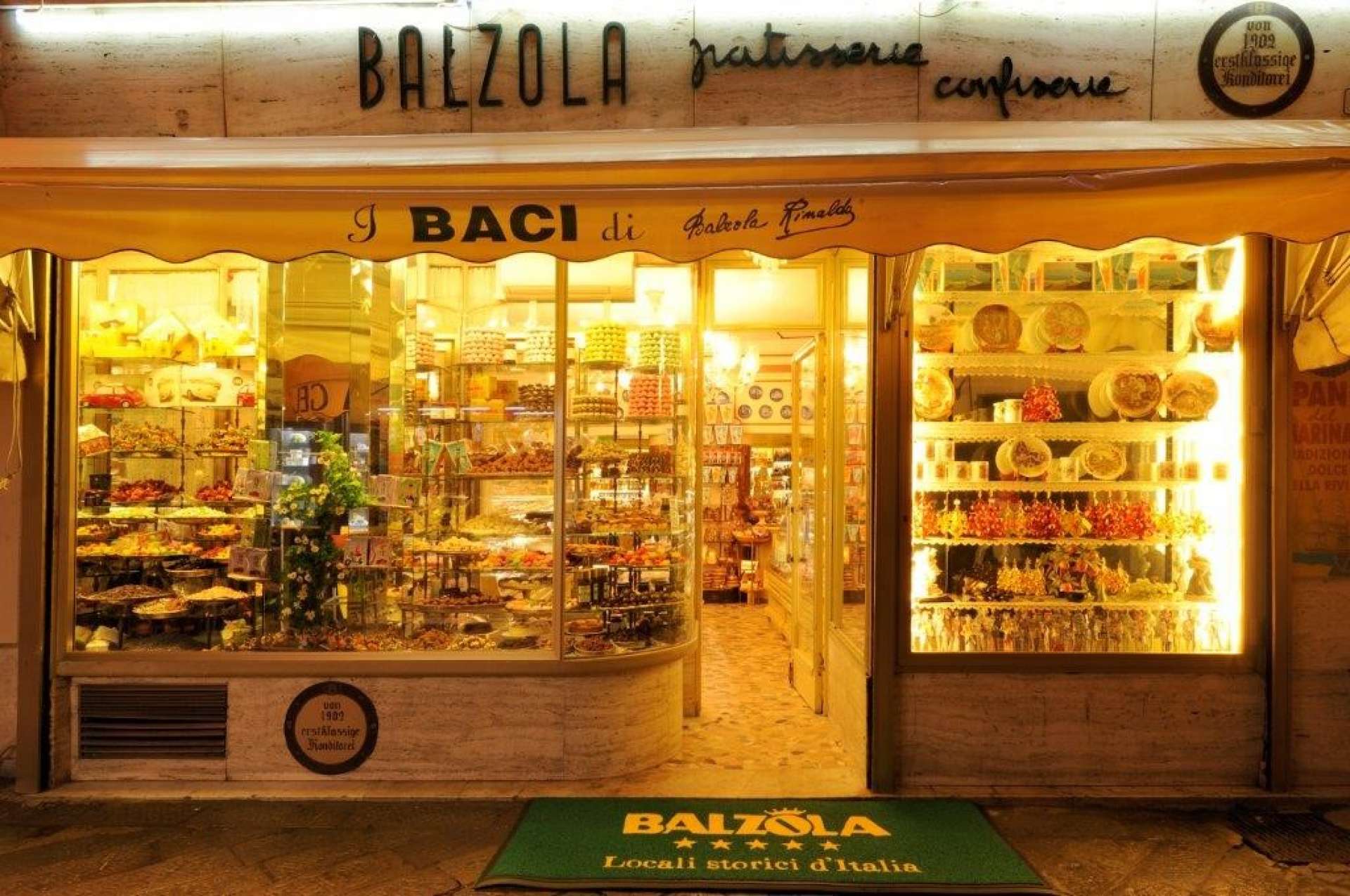 Gabriele D’Annunzio defined i “Baci di Alassio” (Alassio’s kisses) as the dolci della galanteria (sweet treats of chivalry) and they became by the time an actual symbol of the Ligurian city, loved by lots of both Italian and international tourists. The secret behind their success is their handiness, as a gastronomic souvenir to take with you rather to the beach or around the city, or to gift it to friends and relatives after returning from the sea holiday.

Two biscuits “with tuft” (reminding of a French meringue) joint together by ganache of cream and chocolate: the story of these treats commences at the beginning of ‘900 when Alassio started to become a renowned and appreciated touristic destination in the European area. In this new stimulating and dynamic context Pasquale Balzola, founder of the homonymus patisserie, had the brilliant idea of creating a take away dessert using the raw materials at his disposal. The added value to the Baci are the beautiful vintage prints to which they are associated through the gift wraps, used in order to promote some alleyways of Alassio.

How and when was the idea of the Baci di Alassio born and who created them?

Pasquale Balzola, founder of the homonymous patisserie, had the idea and he patented the recipe in 1911 with the raw materials he had at his disposal. At that time, the city of Alassio started to face the international tourism’s ferment, becoming more and more a destination for the holidays of British and Germans.

What is the correlation between them and the territory?

The Baci are still a symbol of the city and all the tourists that come to visit cannot miss a stop for “Baci”. Moreover, the gelaterie (ice cream shops) offer the ice cream taste “Bacio di Alassio”, making people rediscover the taste of the famous sweet treats in a new version.

They have been defined as a “gastronomic souvenir” because they are easy to carry to the beach or as a reminder of the city coming back from holidays. Is this the winning point of the product?

Since the very beginning, the “Baci” have been created in order to be carried to the beach or to be tasted in the city’s streets. It’s a good way to increase awareness of the city thanks to the tourists, who gift the Baci to friends and relatives once back home, making them wanting to visit the Ligurian city as well.

Reveal us a secret of the original recipe.

The peculiarity of Baci is their elegant shape, combined with a more stiff external part and a delicious filling composed by a ganache of chocolate and cream. Instead, the biscuits are made of hazelnut, sugar, egg white, acacia honey, cocoa, wheat flour and butter.

What differenciates them from the Baci di Dama (Dame’s Kisses)?

The Baci di Alassio could be considered as a reinterpretation of the Baci di Dama from Piemonte – which have an even older story, strictly related to the territory. The Ligurian variety adds cocoa and honey to the mixture, to make them softer.

Gabriele D’Annunzio defined them “sweet treats of chivalry”. What is the reason behind this nickname?

The poet was a regular customer of Balzola’s tea room and, at that time, he could not afford buying them so it gave them this nickname to enhance their prestige. Pasquale Balzola thought that this was enough to foot the bill.

Beautiful vintage prints are associated to the Baci, becoming an added value to the product. Does also the aesthetics of the sweet treats tell a story by representing the territory’s traditions?

The prints are a trademark of the product and they are used to promote it in some lanes of Alassio’s alleyway, making it even more related to the territory.

How do you keep yourself updated with the current trends?

Our business is family run:  each generation puts its novelty and language to the table . What never changes is the quality of the products we offer.

What is your relationship with the Grand Hotel and in which occasions did you cooperate with the five stars structure?

We have a beautiful relationship with the Grand Hotel Alassio since years. We provide several welcome Baci di Alassio’s box for their VIP clients and we’ve supported them during their participation at ILTM tourism trade in Cannes the last December. In fact, during this important event, they gave our sweet presents like a gift, to the most important travel agencies and tour operator.